The dance works were commissioned by the National Center for Choreography and Williams received an additional grant from the Filmed in NC Fund from Cucalorus. 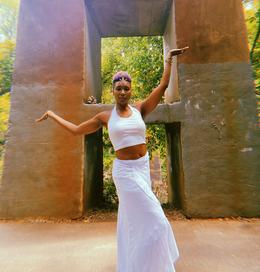 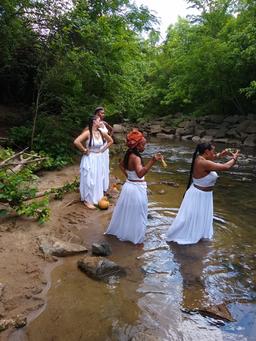 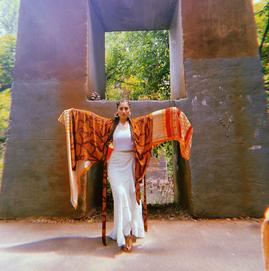 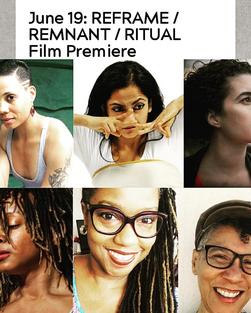 Moving Spirits artist Kendra J. Ross and invited guests Bianca Medina and Sade Adona perform in the dance film, Ìbà Obìnrin with Tamara. The company collaborated with cinematographer, Marlon Morrison in the production of the work.

Kendra J. Ross is a proud Detroit native working as a dancer, choreographer, facilitator and community organizer in Bed-Stuy, Brooklyn. As a dancer in New York City, Kendra has worked with Urban Bush Women, Andrea E. Woods/Souloworks, Ase Dance Theater Collective, Monstah Black/ Motion Sickness, MBDance, Moving Spirits Dance Company, RAKIA!, Melanie Green and as a guest artist with Oyu Oro.  Kendra also completed a European tour dancing with Adira Amram and DJ Kid Koala in Vinyl Vaudeville 2.0 and performed with Gyptian at the MTV Iggy awards. Kendra is currently a company member of Movement of the People Dance Company. Kendra’s choreographic work has been presented at the Florida A&M University, the off Broadway show 7 Sins, Museu de Arte in Salvador, Brazil, Detroit Performing Arts High School, Joffrey Summer Intensive, Dixon Place, Ailey Citigroup Theater, Actors Fund Theater.   She has been an Artist in Residence at Brooklyn Studios for Dance, Bates College, and The Neighborhood Project Through 651Arts, a BAX Space Grantee, and a Visiting Artist at Atlantic Center for the Arts. Along with sharing her art world-wide, Kendra serves as the Founder/Director of STooPS, an outdoors-based community building event that uses art as a catalyst to strengthen ties between different entities in Bed-Stuy.  www.thekendrajross.comraph here.

Sade Ifaloba Oyaniiyun Olatutu Monique Adona (Iyanifa and Iyalorisa Oloya) is presently living on Lenape territory. She is the child of engineers, pastors, seamstresses, and share croppers. Sade utilizes the mediums of dance and music to bring full sensory healing experience of “the urban indigenous intersection”. Her passions are telling the stories of the ancestors and the living, through the lens of ancient and contemporary culture. Sade has danced the Àṣẹ Dance Theatre Collective and is a member of Moving Spirits, Inc.

ÌBÀ OBÍNRIN acknowledges the importance and influences of women in traditions in the southern corridor of the United States and around the world. The film highlights how women have traditionally and historically connected to nature to support and fortify their communities.

ÌBÀ OBÍNRIN is an investigation of the influences of ritual, nature and place in Black women’s traditional practices to care for community. The 30-minute film consists of four dancers that take the audience through a journey of movement gestures and situations that narrate how water is used to heal, elements of the earth are used to cleanse, and wind is used to transform in sacred traditions of the Black women in the south. The filming occurred in three significant places in Charlotte, NC including the Catawba River, the Big Rock Nature Preserve, and McAlpine Creek. The film featuring traditional songs and spirituals, speak to the power of water in nature and Yorùbá songs that connect the relationship of women and fresh waters.

Bianca Medina is a Boricua-Mexicana Dance Artist, Teaching Artist, and Choreographer based in Brooklyn. She spent 2015-2020 touring on stages across the world with Los Angeles based dance companies CONTRA-TIEMPO Activist Dance Theatre, Viver Brasil Dance Company, and with choreographer Marina Magalhães. Medina continues to lead community based dance workshops and residencies. She has served as guest faculty for universities like, University of Wisconsin Milwaukee, Sacramento State University, and North Carolina State University. Using her deep understanding of Modern Release technique and Afro-Latin Diasporic traditions, Medina explores how the body, in all its shifting political and cultural dimensions, serves as a vessel for contemporary storytelling. Through her choreography, she frames tradition as an ever-evolving practice that lives infinitely within our bodies and spirits. Her latest choreographic work has been shown in IATI Theatre’s Tertulia. Medina holds a B.F.A in Dance from the University of Iowa.

The film premieres on Juneteenth at 3pm. Click HERE to view the archive. 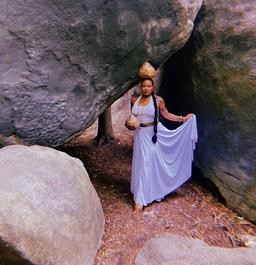